What is the one reason Brits come to Oz? Yep, you’ve guessed it – to visit Ramsey Street, home to Neighbours (for all you non-Brits, Neighbours is an Australian soap opera that Australians love to hate!). Well, to all the neighbours fans out there (all three of you!) – I have walked up Harrold ‘Jelly Belly’ Bishops driveway and to all the other houses on Ramsey Street. You think this is exciting, well, I have also been mingling with some of the stars!

Every Monday night, hundreds of crazed British backpackers cram into a pub somewhere in Melbourne where a select few of the Neighbours stars come and allow people to grab, poke and maule them for thousands of photo shoots. Such a good night and the stars were all good sports. I can now say I have rubbed sholders with the likes of Joel, Dr Karl Kennedy, Paul and Amy. I had such a good night that I’m going back next week when Harrold, Toadfish and others will be there. Oh, we also managed to come last in the quiz which I am quite proud about.

But getting back to what I’ve been up. Since I wrote last I was departing on The Ron of Argyll to sail around the Whitsunday islands. The weather was quite changeable which made for great sailing but not good for the snorkelling. Oh well can’t have everything great trip all the same and managed to have a laugh with the assortment of people on the boat. Also, while in Airlie I took a trip out to the infamous Great Barrier Reef to fit a dive in and to do some snorkelling. Not bad but not the best place I’ve dived, I’m getting a bit fussy now after diving at some of the top spots around the world, can’t see myself going diving off the East Anglian coast on my return.

Heading on up to Cairns various beach and scenic stops were made including a tour around a croc farm. The party town of Cairns provided the venue to catch up with and say farewell to people I’ve met throughout my East coast trip before heading further up north to the beautiful area of Cape Tribulation. It is here where rainforest meets reef and a great place for walks, croc spotting and to recharge batteries (or in my case recover from a huge hangover).

The Red Centre being the next destination. Saw some very interesting big red/orange coloured rocks, known to some as Uluru (Ayer’s rock), Kings Canyon and The Olgas. Absolutely spectacular. 18km’s walked in 2 days then a 5-day trip down to Adelaide which has been my most favourite Oz experience. Driving for hours through the red desert, nothing but nothing. You soon get an idea of just how big Australia is. Every now and again Skippy hops by or a wedge tailed eagle swoops down to scoop Skippy off the road. 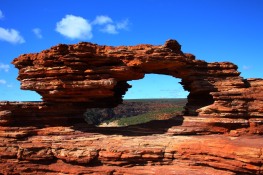 The first night of the trip was spent in the strange underground town of Coober Pedy which is situated literally in the middle of nowhere and the small population hosts an amazing 47 different nationalities – very bizarre. The nature of the town gives some indication as to why such a diverse range of people are drawn there, the nature being an opal mining town. For $2000 aus dollars you can buy a bit of dirt and dig until you strike lucky. Mounds of sand and rubble surround the town. Houses, our hostel, churches etc are built under the ground as it is too hot above. 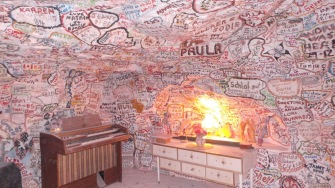 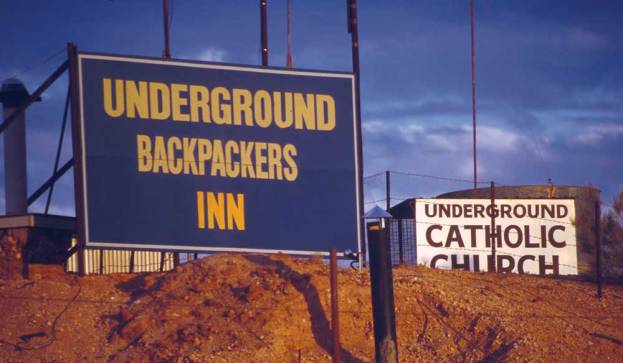 Heading further south the landscape gradually changes, vegetation increasing and the Flinders mountain range crops up. Lots of long exhausting walks were a shock to the system after being sat on a bus for what seems a very long time. However, things soon became easier as we entered the Barossa Valley – home to some of Australian’s fine wines. Went on a couple of wine tasting sessions – very nice too! The evening was spent in an old school, now converted to a hostel where everyone had to dress up in girl’s school uniform. The boys loved it. We also organised a good old fashioned 80’s school disco complete with school chairs lining the walls. A very funny night was had by all.

Arrived Adelaide the following morning and was in shock. After 10 months of heat, I freeze! It was so cold (only about 12 degrees) I couldn’t move. It felt like I was back in the UK. Mad to think that a few hundred km’s north there’s lovely desert heat. Oh well I’d better get used to it as I’m heading for NZ next where it will be winter with snow and all. Didn’t get up to an awful lot in Adelaide apart to stay in bed to keep warm and go shopping to buy fleece, socks and warm things.

From Adelaide I embarked on a 4-day trip to Melbourne. More walks this time in the Grampians, a bit of rock climbing, heaps of wild koala’s here and there and other wildlife. The highlight being the Great Ocean Road and watching sunset behind the 12 apostles – beautiful!

Now in Melbourne which I like a lot, well hard not to knowing it is home to Ramsey Street – very exciting! Sort of exploring the city by aimlessly rambling around. Also catching up with my lovely Aussie friends.

From Melbourne I will do a 4 day trip back to Sydney stopping at Phillip Island (home to lots of Percy penguins, seals and other stuff), snowy mountains and Australia’s capital Canberra.