Crafty Monkey at the Beach WINS Garden Office Category in 2015 Shed of the Year!

Whoop Whoop!  Crafty Monkey at the Beach has won the category of Garden Office Shed of the Year!

What a fun experience and who would have thought when I first had the idea of getting a garden office that I would be appearing on Channel 4’s ‘Amazing Spaces’ presented by the lovely George Clarke! Not me!

Basically I was one of the last entrants into 2015 Shed of the Year and because my shed was effectively a flat pack (well not quite) log cabin from Dunster House I didn’t really think it was as inventive as some of the entrants where they had made their sheds from scratch from all manner of materials or they had a real uniqueness about them such as a shed built onto the back of a truck or a shed that was made to float down the river or perhaps the owl house, one of my faves!  So when I received the phone call to say I had made it through to the final 4 in my category and I was invited down to the final I was over the moon.

The winner of each category was to be decided by public vote so I took to social media to try and rally votes from friends and the local community.  I was overwhelmed by the support I received.  I  had BBC Radio Cambridgeshire who sent a roving reporter Johnny around to interview me in my shed and related the story back to the lovely Dotty McLeod on her Breakfast Show in the studio.  He was great fun and when he spotted our Sinclair C5 in the garden he also interviewed me for that – being 30 years since they were born! 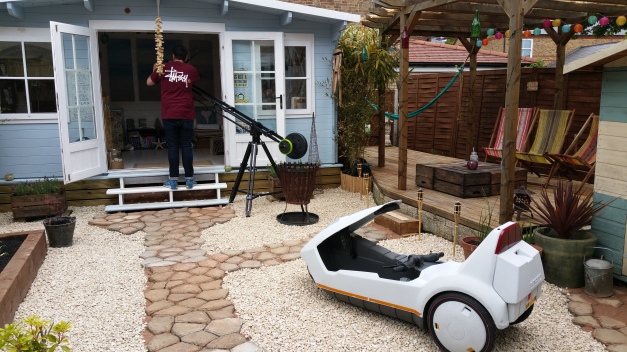 I also appeared in the St. Neots local rag The Hunts Post and also in the Cambridge Evening News (see below pic). All the media interest was all very exciting and off the back of all this it seemed that ‘She Shed’s’ (shed’s owned by women) were flavour of the month.  ITV contacted me and came and filmed for a pilot show presented by the lovely Davina McCall as they were doing a feature on She Shed’s, we even got to go down to the studio in London and I met the lovely lady in the flesh!

It was then time for the next stage in the competition and for the final of Shed of the Year to be filmed.  We went down the night before and were put up by Plum Pictures in a hotel in Maidenhead and then taken to the filming location the next day where we met all the other weird and wonderful sheddies and the judges and crew, not forgetting the lovely George Clarke and Mr Shed himself Uncle Wilko!

A lorra lorra fun was had as we rehearsed our oooooh’s and arrrrr’s and our applause ready for the finalists to be revealed!  My category Garden Office was pretty much at the end of the day…cue George Clarke ‘And the winner is….’  Yeay!  ‘Crafty Monkey at the Beach’ and a curtain fell down to reveal an artist impression of my shed!  I was actually speechless which for those that know me will find that hard to believe but I was a bit lost for words and thrilled to have won the plaque for my shed.

This is the winners plaque!

Who would have thought a shed could bring so much joy!

Check out my other blog posts on my Crafty Monkey at the Beach entry and also Danny’s Beach Bar which was my next shed project!

2 comments on “Crafty Monkey at the Beach WINS Garden Office Category in 2015 Shed of the Year!”