From the peace and tranquillity of Fijian island life, I leave for the high rise tourist Mecca of Waikiki, Honolulu.  Home to world renowned surf beaches.  Beach life here a complete contrast but the change was good.  In my time here I ran around exploring and attempted to tick off the main To Do list:  a hula show; a hike to the summit of Diamond head (big volcano) to get a great view of the surrounding area; a day spent at the picturesque Hanuama Bay where the best snorkeling on the island can be found (the fish here, obviously well used to the masses invading their space, allow you to get very close); the obligatory shopping trip (went a bit mad!) and being topical with the latest Hollywood blockbuster out – a trip to Pearl Harbor.  This went all a bit pear shape as I fell asleep on the bus a couple of stops before arriving there and didn’t awake until I was virtually back to the point where I got on the bus.  I decided to abandon this mission and gave it up as a bad job.  The thought of a rest on the beach and a touch of body boarding sounded a much better prospect, so I settled on buying the postcard and seeing the movie!  I am not quite so ardent with my sightseeing as at the beginning of my trip.  All in all I had a good time in Hawaii, however I was very disappointed not to have bumped into Tom Selleck although his cardboard cutout was everywhere. 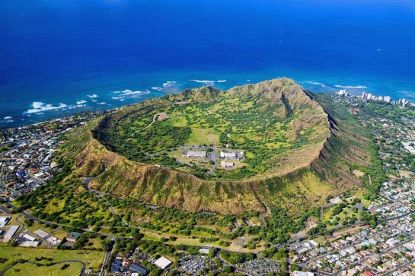 I hung the Hawaiian shirt up and board the next plane which is to take me another step closer to home.  At this point I was beginning to get a bit jaded with the traveling lark, the novelty of living out of a backpack and sleeping in bed bug infested beds surrounded by a load of others had begun to wear thin and I had even started to look forward to returning to the UK and home comforts such as having a bedroom.  However, landing down and spending the last week in Canada has been a breath of fresh air and has rejuvenated the batteries.  So far I love Canada, more particularly the Rockies.

Despite not really being a city tourist person, I did find myself warming to Vancouver.  Amazingly enough the public transport here has been on strike since April 1st!!!  The taxi businesses here must be booming.  I find an alternative form of transport to explore the city and hire a mountain bike.  The city itself is quite small so it doesn’t take long to get around, I spent most the time in Stanley Park which covers quite a large area on a peninsular and is more like a forest. 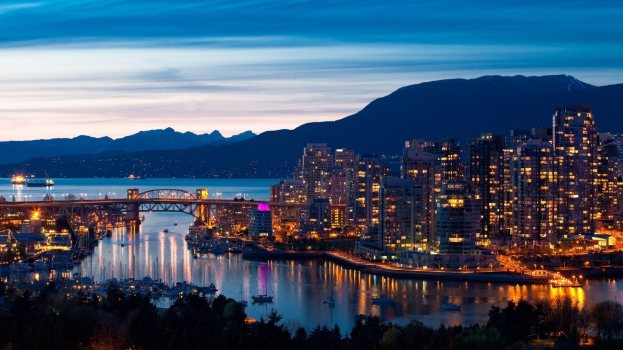 After a couple of days I am itching to get out to the mountains and board a backpacker bus trip with 21 others and head for Whistler, a top N. American ski resort. Whistler resembles a town in the Alps.  Despite the blazing sun and clear blue skies there is still a lot of snow for ski-ing in the mountains.  The hostel where we stayed was set out of town in the middle of the forest on a lake, majestic snow capped mountains behind, a fantastic setting that is to become the standard scenery as I carry on around.  In fact the scenery gets even better, if that’s possible.  A couple of the crazy kids in our group braved a dip in the freezing cold water of the lake but I managed to hold back, instead getting my exercise from hiking to and around another lake. 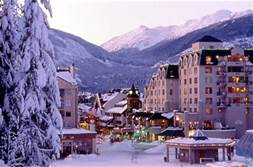 From Whistler we head east stopping off at more beautiful lakes, this time I am either brave or stupid and go for a swim myself.  I last a total of about 30 seconds which is about as long as it is possible to stay in icy cold water before getting hypothermia.  We also stop along the way to do a fair few hikes and spend a night in an old courthouse, a night camping in Valemount and a night in log cabins in Jasper National Park. In the evenings sitting around campfires ‘til the early hours with a Canadian (it’s the brand of beer) has been the thing to do here.  The days are so long here with the sun setting as late as 10.30pm.  I’ve also did a  bit of mountain biking on the tracks in the mountains which was great apart from being attacked by a million mosquito’s.

On July 1st – we celebrate!  Not only is it Canada day where carnivals, parties and fireworks line the streets but more importantly it was my birthday – 21 again!  I am with a really good group and they decorated the bus with balloons and birthday banners and they were even kind enough to make me a special birthday frock to wear for the day. 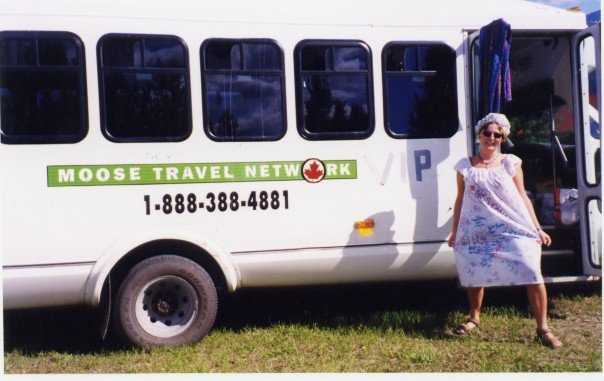 A very revolting bad taste dress that they had enhanced by writing all over it, complete with a polka dot shower cap.  I was made to wear it all day thus got quite a bit of attention from the public.

We saw some more spectacular scenery, hiked to Kinney lake for lunch and also visited Maligne Canyon which was superb.  I also got to see my first wild bear which made my day and also got a photo of a mountie in traditional uniform.

The day after we arrive in Banff which is a place I instantly fell in love with. I have been to quite a few places now but I must say Banff would be one of my favourites.   Set in the national forest with 360 degree mountains around you.  What’s more the surrounding area is home to some of the best lakes I’ve ever seen.  Lake Peyto being my favourite which is just the most amazing milky turquoise blue colour with Lake Louise and Lake Moraine being close competitors.  On the way to Banff we also stopped off at the Athabasca falls and for a hike up a glacier.

Walking up the mountain in Banff

It was in Banff where we celebrated my birthday night (a day late) and had a big night out on the town checking out the local bars and clubs.  All good stuff.  I depart the tour bus in Banff to spend some time here.  The weather has heated up and it gets as high as 40 degrees which happened to be the day a few of us decided to hike to the top of Sulphur Mountain, had I realised how steep it was I don’t think I would have attempted it.  It was a killer but once at the top we were rewarded by  a brilliant view and also a free ride down in the gondola.

I have since moved on from Banff and am relaxing at my friend Lin’s house in Windermere set on a lake (not the lake District but BC in Canada).  Lin is a great tour guide and is doing a good job of showing me around, last night she took me on her friends house boat on the lake and she has more things lined up before we take off for the infamous Calgary Stampede – possibly the biggest rodeo in the world.  Apparently 10 days of partying, festivals and hard-core rodeo with good old country and western – Yeehaa cowboy bring it on!  Laren – I’ll say hi to your home town for you.

Just under 6 weeks to go now before I hit Blighty again!