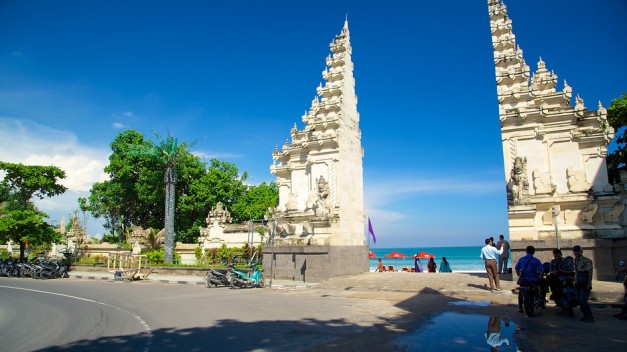 Time is flying by, weeks seem like days! Apologies for being extremely lapse at emailing recently. After my 2nd stint in Singapore my next stop was Kuta, Bali where I lasted a whole 13 hours. Kuta, the main beach resort was far too hectic for me, far too built up and more like a club 18-30’s med resort than the paradise island advertised. Must be getting old. However it has some great surf shops!

6am the following morning I made my way via minibus-ferry-bus-small boat to Gili Trawangan, bit of a journey but well worth it to arrive at a tiny paradise island off the Lombok coast – much more my scene. White shimmering sand, clear turquoise water with excellent reefs and coral for snorkelling and diving, no motorised vehicles or hawkers and not many people – need I go on? 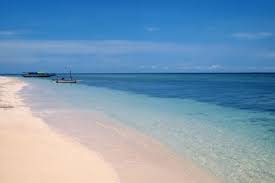 My plan like nearly everyone else on the island is to stay a few days but like others you end up staying for as long as you possibly can. For me it was 9 days which after moving on every couple of days for the past few months is quite a long time.

While there I went diving seeing shark, turtles and an eagle ray – all very exciting believe me. Also hired a bike and did a bit of off roading around the island. 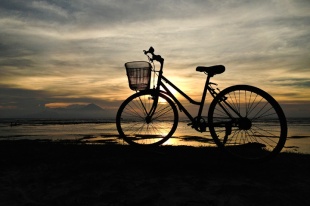 Bene, an indonesian guy who worked where I stayed invited me over to Lombok to meet his girlfriend and family or I think it was more a case of me inviting myself. I ended up staying 3 days in their primitive home being waited on hand and foot and was taken around by motorbike to all the sights. 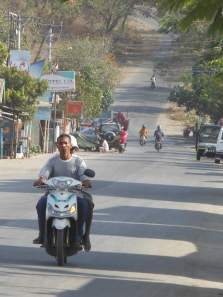 We stopped off on the coast where there was a crowd of people to see what all the commotion was all about. We discovered that they were filming a popular Indonesian show. The stars from Jakarta were all in traditional costume. Being the only westerner around those parts the stars found me more a novelty than I did them and I was invited into the stars enclosure where they were all crowding around me asking questions. Quite amusing as I can’t imagine that happening back home and I did feel quite bad not knowing who on earth they were.

I was also a bit of a celeb back at Bene’s home as it was situated in the army camp full of Indonesian soldiers who acted like I was the first white girl they had seen – you can imagine I was just a bit popular. The family I stayed with said they had never had so many visitors before!

Back to Bali to get my flight to Oz, I decided to be extravagant and splash out 15 quid on a flight from Lombok – a 20 seater plane with the cockpit being part of our cabin! On arrival I had it all sorted to connect with my flight to Darwin only to find out that I have obviously been far too relaxed on the island to think about when my flight was and it turns out I am a day late – Whoops! In fact it would be the one flight where there is only one every week which now happens to be full til after Xmas! Being the lucky person that I am I managed to get on a direct flight to Sydney a couple of days later. This means Australia’s outback will have to wait for me til a later date. I think it all worked out for the best as Kakadu national park near Darwin is pretty flooded at the moment and apparently too hot plus I got to spend more time in Bali which I enjoyed much better than the first time – maybe due to the jungle juice cocktails! 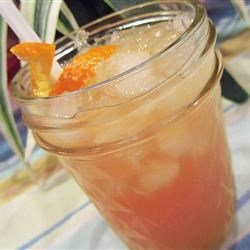 I have now been in Sydney since the 16th and am still very excited about being here, if not slightly worried about the 24hour bars around. After a couple of days in the city checking out the famous Harbor Bridge and Opera House I headed off to a cosy hostel in Coogee Beach, a more relaxed seaside town where I will stay for Christmas. I cannot believe it is only 4 more days til Christmas, I’ve had no lead up being in Hindu, Buddhist and Muslim countries and being in a hot climate living next to the beach doesn’t help!

Well better go and top up the tan in preparation for Bondi Beach on Christmas day. Merry Christmas everyone and enjoy your turkey while I throw another shrimp on the barbie.