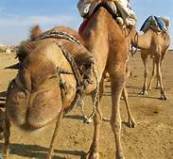 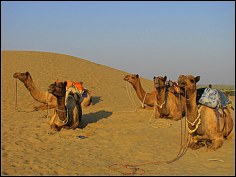 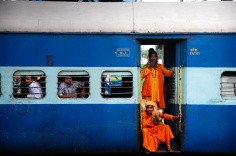 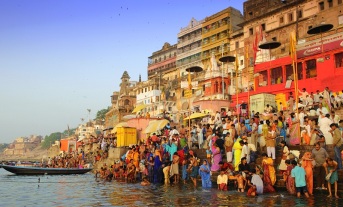 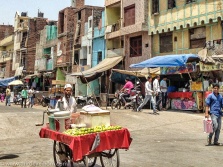 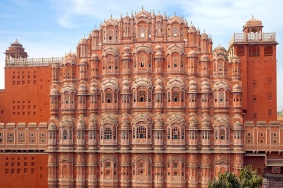 Back on the road again – well more potholes and puddles than actual road!  Makes journeys in the rickshaw’s quite interesting anyway.

Arrived safely into Delhi and was very shocked by the lack of people attacking us for taxi’s etc.  In fact we have not been hassled at all yet which is very surprising as we do sort of stick out like sore thumbs! Been getting some good bargains though.

Also the monsoon rain is quite disappointing as it has been lighter than the rain we’ve been having in the UK (didn’t need to have packed my waterproof outfit after all!)  Tomorrow we are going to do Delhi – opted for the easy option of a tour (8hours tour for the equivalent of 1 British pound) so we can get it all over with in a day and then move out of the hustle and bustle of the city on down to jodhpur in the Rajastan region. 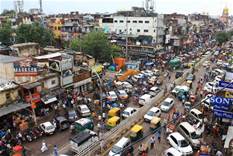 Thought I’d found a bargain with this email cafe – 20p an hour, only I didn’t realise that it takes 5 minutes to perform each task!  It took me 30 mins to read 2 emails.

Anyway off for an early night as up bright and early tomorrow.

Still alive despite the many collisions with rickshaws, bikes and cattle that densely pack the streets. After doing Delhi in a couple of days we headed for the pink city of Jaipur where all the buildings were more a pale orange colour rather than pink.

We arrived on Krishna’s birthday (a hindu god) so a big festival with floats lined the streets – sort of like the Notting Hill festival but not quite. 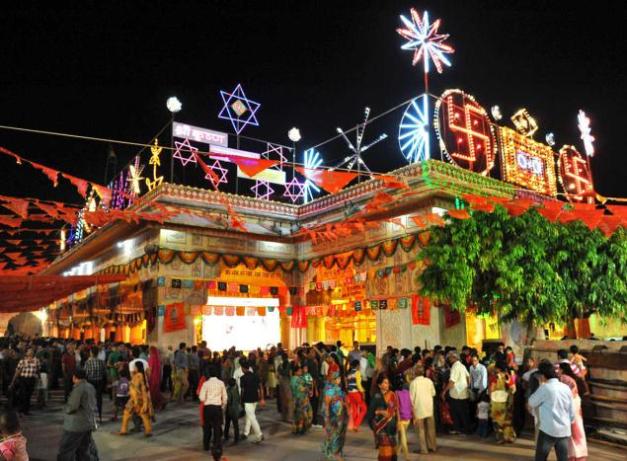 From Jaipur we boarded our first train to Jaisalmer – the journey being an experience in itself! 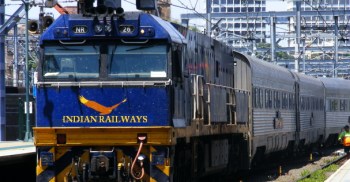 Everyone’s very friendly and you end up knowing the life story of all your fellow passengers.

The hotel in Jaisalmer was a bargain at 5 rupees a night (equivalent to 7p!).  Admittedly that was to sleep under the stars on the roof but their deluxe rooms were only 70p.  Here we traipsed around the alleyways in the fort and even got invited into an Indian family’s home.

The next day we departed on a 2 day camel safari in the desert.  This turned into a bit of an adventure when the heavens opened up – the monsoon we had heard about hit us at full force and didn’t we know it!  the desert now resembled more of a marsh and we were wading through knee high water dragging the camels behind   as apparently they don’t like water.  After a couple of hours the rain stopped and we hit the soggy sand dunes where we camped under the stars after watching a beautiful sunset.

It took a while to relax enough to go to sleep after one of our guides found and killed a dangerous snake in front of us – Nice!  2 days on a camel has left us with John Wayne swaggers. 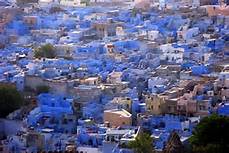 From Jaisalmer we took a train to Jodhpur, known as the blue city which you instantly know why.  While here we visited yet another impressive fort.

Today we took another bus to Udipur which is a very relaxing place and have found a great hotel with the back garden being a lake.  In the middle of the lake is a palace where we will treat ourselves to dinner tomorrow night. 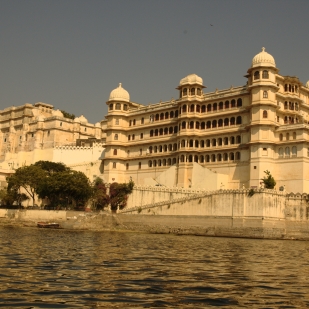 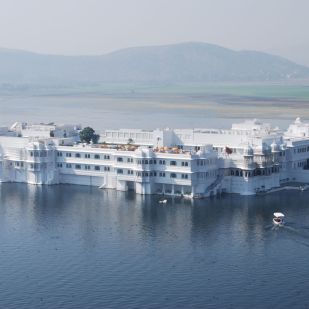 A lot of mileage has already been covered and we have met loads of people.  I  have also sat through a 3 hour Hindi film at apparently the best cinema in India (the
same cannot be said for the toilets there though).

Cheers to all those who have emailed.  I will be replying in the next few days now we are stationary.

I think the last time I wrote I was in Udipur where we ended up staying quite a few days buying lots of stuff that I don’t actually need and have no room for!  Also visited all the usual tourist sites including Monsoon Palace for sunset high up in the mountains.  While there we treated ourselves to dinner at India’s equivalent to the Ritz, ‘The Lake Palace’ – funnily enough it is a palace situated in the middle of a lake.  It was a bit too posh for my liking with one meal using up nearly a weeks food budget!  As for the price of beer, they add on 70% tax on an already largely inflated cost – outrageous behaviour!  I am now back on my Thali’s at 20 rupees (about 30p). Thali’s are meals that consist of about 3 dishes and come with rice, chapatti & curd – very tasty.

From Udipur we travelled to Agra, stopping off back in Jaipur as we heard of to a cheap hotel with a pool so spent a couple of days there to cool off.  The main attraction in Agra was obviously the Taj Mahal which was truly magnificent.  We got up at the crack of dawn to get there before everyone else, only to find that everyone else had the same idea!!!  Needless to say our Princess Diana shots were more like group shots full of strangers in the background.  After the Taj, we did the Red Fort, Baby Taj and the rest of Agra.

Next stop from Agra – Varanasi.  I woke up from the night train to find that some person has taken a liking to one of my bags which while solving my excess baggage problem was rather inconvenient as it was the bag with my wallet, camera (with fab Princess Diana-esqe shots of the Taj!), my favourite new blue t-shirt with camels on it that had cost me about 65p, and many other treasured items.  Surprisingly, this had not put me in the best of moods for the day and I proceeded to take out my frustrations on the rickshaw driver who would not leave us alone – no change there then!  The next few hours were spent attempting to learn Hindi so I could communicate with the local police who for some reason have no knowledge of English.  Fair enough, but strange when everyone else I have come across can.  Anyway, I had quite an amusing time with the police,organising them and trying to educate them on the health dangers of chewing tobacco, also expressing my view that it is not pleasant to see people chucking up their guts and spitting out in front of you what looks like blood every few seconds!  I don’t know maybe it’s just a personal thing?  The police just found it all very funny so maybe health promotion is not for me after all.

I do like India and the Indian people, they have a good sense of humour and I’ve been having quite a laugh with the locals.  Although I sometimes get the impression that they are humouring me and that they actually think I am quite mad. 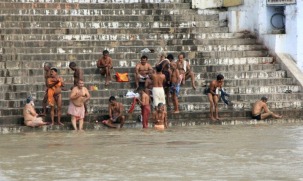 Back to Varanasi – the home of the ghats (large steps) on the river Ganges.  Varanasi is considered the most religious place on earth for Hindus with thousands of pilgrims and residents on the Ghats performing their daily ritual ablutions.  You wouldn’t catch me bathing in there, especially after out dawn row boat trip where we spotted a dead body floating around – Nice!!! Quite a lucky person though as dying among the bathing Ghats of Varanasi apparently attains instant moksha (enlightenment).  Many dying people come here to spend their last days, however, most people are cremated on the burning Ghats before being scattered into the water, but if poor you don’t have the luxury of cremation.

We have been getting cycle rickshaws around town but the other day I felt quite guilty after getting on one as I seemed to have picked not the healthiest of people who had very short legs.  This made it very difficult for him to reach the peddles – thus cycle. This combined with my weight…well you can imagine, bless him.  Despite the energy he was exerting, the rickshaw was still going slower than a snail so I insisted that he sat in the back while I hopped on and cycled his rickshaw bumpily along the road.  I quite enjoyed it and managed to build up quite a speed while the poor guy sat in the back in shock!

Anyway off to the tailors now to have some clothes made for about a quid an item!

That’s all for now folks, until next time.

PS. By the way the very short haircut I had in Delhi for 50p that has left me resembling Jack Nicholson from The Shining still refuses to grow into something that looks half decent!